Ever since Fred Sherriff and B.G. Goslin partnered to form Sherriff Goslin Roofing back in 1910, we’ve been earning our reputation as one of the safest, most trusted roofing companies in the Midwest. We are family owned and operated, three generations deep, making every roofing project we complete and every company milestone an homage to the values, beliefs, and attitudes passed on through the leadership of the Sherriff and Goslin families.

Sherriff Goslin Roofing started as a commercial roofing company, but 100 years and 25 locations later, we’ve grown to become the Midwest’s leading commercial, architectural, and residential roofing company with our own line of high quality shingles. Some say we’re a unicorn in a field of horses. We just say we’re a roofing company that does things right, enjoys what we do, and shows our customers the respect and appreciation they deserve.

In 1906, the Battle Creek Roofing & Manufacturing Company was first formed, with an office in downtown Battle Creek. The company became a partnership in 1910 when Fred Sherriff purchased a half-interest in the firm from Mr. W.E. Polhemus. In 1913, Mr. Sherriff purchased Mr. Polhemus’s remaining interest in the company, with B.G. “Bert” Goslin as his partner. By 1920 they changed the name to Sherriff Goslin Company.

In the early years, they focused on local commercial roofing. They also saw sales opportunities in manufacturing a full line of paints. “It was good paint,” Mr. Goslin recalled, “but somehow we just couldn’t make the big paint companies understand that we were competing with them. In fact, they didn’t even realize we were in business!”

Tar and gravel was the type of roofing they were doing at the time, but as they were wrapping up the paint venture, Mr. Goslin introduced house roofing and the business thrived. The partners were soon adding branch offices, and eventually expanded throughout much of Michigan, Ohio, and Indiana.

Three generations later, members of the Sherriff and Goslin families are still involved in the business. The company has branch offices in 25 cities, features a roofing shingle manufactured exclusively for Sherriff Goslin, and supports a 10-year full-service guarantee.

Company chairman William Ticknor spoke about the importance of looking forward to the future. “There are always people who need roofs, and we’ll go find them. In our files I found a quote for a 1933 job, signed by my grandfather, Fred Sherriff. He ends the letter by asking for the job, and that’s what we will keep doing now. We can handle the challenge.”

Saying it’s uncommon for a business that primarily roofs houses to be around for 100 years, management sees this centennial year as a testament to the hard work and resilience of a long line of people. “It has everything to do with people,” said company president Robert Sherriff.

Fred Sherriff becomes a partner; the company is incorporated in Michigan

Name of the firm is changed to Sherriff Goslin Company
Business opens branch offices in Grand Rapids and Lansing. Patent work started on the Art-Loc® 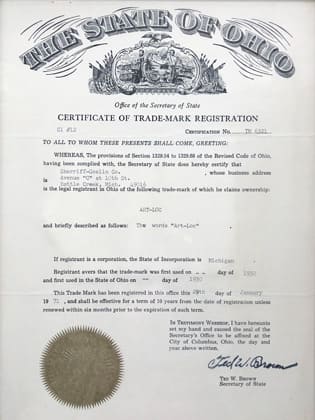 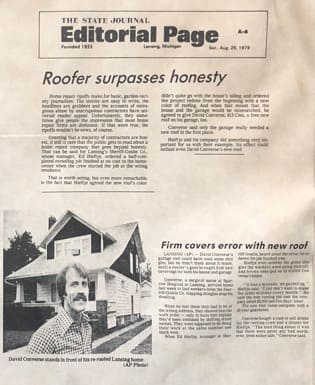 Owen Goslin joins the Board of Directors

Stephen D Ticknor President and Chairman of the Board (4th generation)

Sherriff Goslin Roofing began as a “one-horse” roofing company in 1906 in Battle Creek, MI. The company thrived after the introduction of its Art-Loc® interlocking shingles for residential applications.

For more than 100 years, premium products, professional service, and integrity in business have earned Sherriff Goslin Roofing a reputation for being the most respected and trusted roofing contractor in the Midwest.

Sherriff Goslin began as a “one horse” roofing company in 1906. Three generations later, we continue to honor the core values that formed the foundation of our company over a century ago. Driven to provide our customers with a better, safer roofing experience, our goal is to provide high-quality commercial and residential roofing services that are bolstered by our commitment to ensuring customer satisfaction. Because of this, quality, safety and integrity are, and will always be at the core of our business.

Our mission statement continues to be, “our assurance of continued quality is guaranteed.” This statement, in many ways, exemplifies Sherriff Goslin Roofing’s commitment to delivering quality products and work. Any company can deliver quality in the short run. It takes a company that is truly confident in their abilities to offer a ten year free service guarantee on their work.

At Sherriff Goslin Roofing, we have implemented an ongoing “Safety First” program to help eliminate safety risks and to illustrate our dedication to keeping our employees safe. By utilizing extensive safety training and equipment that exceeds OSHA regulations, we have shown that we are unwilling to compromise when it comes to the quality of our work, the thoroughness of our services, and of course, the well-being of our employees.

Without integrity, there can be no meaningful relationship between a customer and their roofing contractor. Holding ourselves to a higher standard, we aim to provide every customer with the highest levels of respect. Whether you’re interested in roof shingles, roof repair, or a full roof replacement, our team will listen to your concerns, help you identify your needs, and work with you to build a lasting, productive partnership.

Sherriff Goslin Roofing has branch locations throughout Michigan, Indiana, and Ohio. Each one offers the best in residential roofing, commercial roofing, farm, barn, church, and specialty roofs, emergency roof repair, storm damage roof repair, and other essential roofing services. Every Midwest roofing job we bid on starts with a free comprehensive roof inspection and roofing estimate. These services, combined with our commitment to durable, long-lasting roof repairs backed by our industry-leading 10-year free service guarantee have positioned us as the Midwest’s preferred roofing contractor for high-quality roofing systems.